Exhibitions.
Gordon has exhibited his work in selected group shows throughout the UK and abroad.

This weekend is the last chance to catch Gordon Picken‘s fantastic exhibition at the Old Ambulance Depot in Edinburgh – it finishes on Sunday. Picken, who is from Kirkintilloch, has been described as one the best painters working in Scotland today. He is interviewed here by fellow artist and admirer Ian Moir:

Do you ever have painting disasters where you realise half way through that the overall picture isn’t working out?
Yes, quite a lot but the way I work I can remove the segments that aren’t working and add in new ones. I never throw any panels away and can usually recycle these into new paintings.

Were you painting large pictures in segments before David Hockney was doing it?
I don’t know about that, I wasn’t aware he was working like this when I started to do it. I got the initial idea when I saw some work in the 80s by the Australian artist Imants Tillers who does massive paintings whilst sitting at a desk. He paints on small canvas panels which join together to make paintings which are sometimes 30 foot long by 10 foot high.  So, years ago when I was asked to do a large exhibition and I didn’t have a big studio, I thought this method might be the answer. Plus, I always liked the way Malcolm Morley squared up his work.

You focus on dilapidated buildings which have been overtaken by nature. How would you describe the feeling you get when you encounter these places. Is it a bad feeling or is it more spiritual?
More a feeling that something has been lost, but maybe can be rescued in some way. The places that I use in my paintings are typically mundane  but I try to imbue them with a greater meaning…a sense of what’s gone before, a spirit of the place, if you like.

I get the sense that you are preparing the viewer for the probable demise of civilisation. There is a slight sense of foreboding in your work. Is this intentional or are you simply a nature lover?
We visit a place every year on holiday where they’re digging a lost city out of the sand, a whole city disappeared. Then I come back to the UK and I see a similar thing, a previous civilisation’s grand architecture is being engulfed by undergrowth and slowly returning to nature – be it railway structures, hospitals, industrial buildings, factories, Victorian pavilions, etc. So I try and make a connection between these lost societies, so that a railway viaduct becomes a roman archway etc. Someone commented that the foliage in my work could be a metaphor for a sort of laissez-fairism and I suppose there could be seen to be an element of this in it.


Having known you for some time I think of you as an extremely modest person. Do you find it difficult when people praise you for your artistic talent?
Of course, but it’s probably because of the detached way that I work, doing a segment at a time, never the whole (and I never really get to see the work as a whole until hanging it up for a show), divorces you from the creation in a way. So when someone says to me that they like the work then I really don’t feel as if I’ve painted it, not as a whole anyway, and I haven’t. I just feel part of the process and I can’t take all the credit…. like a cog!

Is humility essential for an artist or does egocentricity have its place?
An artist who doesn’t like to show off is a difficult combination. But I suppose the egocentrism comes into it when you lock yourself away in a studio for months on end to rub coloured pigments onto a canvas with a wooden stick with hair on the end and then have to convince yourself it’s meaningful.

What is your main ambition as an artist?
To design and paint better pictures.

Who is your favourite painter?
This changes every week, last week it was Richard Diebenkorn, this week it’s Euan Uglow, the following week it could be Allan Davie. 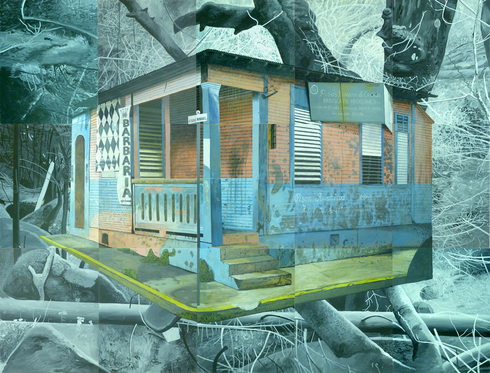 SOLASTALGIA
Posted on October 23, 2012
4
On the walk to the library from which I am writing this post from, I passed the site where the library I used to work in as an undergraduate once stood. Even although this structure ceases to physically exist, it is just a car park now, it, or parts of it, rather, vividly exist in my mind. There’s the place where I liked to sit: on the fourth floor at a desk between the art books and the music manuscripts. This highly desirable spot trumped all others for its close proximity to a power socket. Concerns such as this were important in 2007. There must have been a few people operating on equally catastrophic machines, however, as around 30% of the time I would be left feeling majorly disgruntled, after a twenty minute walk in the harsh rain, that someone had had the audacity to sit there of an evening. There were the moving book stacks in the basement: I remember rapidly turning one of the wheels on them late one night before an exam so as to sandwich my friend between shelves of musty tomes. We desperately needed a laugh after having been awake throughout the night before due to the symptoms induced from a Red Bull heavy diet. Even although some of the joins may be fuzzy, I remember almost every inch of that building – bristly carpets sore on the knee, slender windows between stacks which I remember seeing if I could fit between when I was bored one day and odd retro fonts on the toilet doors which, at the time, I thought looked American in style. Everything.


When I look at Treehouse by Gordon Picken, one of a selection of recent paintings by the artist currently on display at The Old Ambulance Depot, I feel I empathise with him. My attachment to the old library, which I do not have for the new library which I am sitting in, tiptoed up behind me like a welcome ghost when I first saw the painting. The artist’s memories of the Treehouse are fragmented, multiple images work together to form the entire piece, but, he too, remembers every minute detail of the structure somewhere deep in the recesses of his mind. He can visualise the three steps up to the doorway, the irregularity of the slats which covered the windows and the precise point where the rusty join in the sign spliced text. The general shape of the building may be skewed in memory, but the peculiarities are as vivid as if they were visited yesterday. In reality, this small building was beside a road. This can be deduced from the single yellow line which runs along the pavement connected to the foundation bricks. The asphalt in the image sharply fades away, leaving the building suspended in a fragmented wooded landscape.  Something isn’t quite right.
The dislocated conception of Treehouse and the inability to record general locality thrust this building into a personal limbo. Picken’s feelings when reconstructing this spot do not seem cheerful. When the sections of the work join, it is like the artist is desperately trying to reformulate the thing so as not to risk its loss. The trees in the background are dead and wiry. They coil around the little house like atmospheric counterparts in a horror film – decayed, but animated. At any time they could engulf the house and steal it away from Picken forever. It is for this reason that the title seems so apt. Solastalgia: the feeling one gets when they experience a longing for the desired status quo of their surroundings – remembering, as it were, how things are supposed to be and not, due to the effects of things out with one’s control, as they are now. Similarly, even though I am in the university library and all the books I used to work from are here, it all just feels a bit strange. I should be next door in a building which no longer exists.
The absence of the artist’s physical presence in the work, but the strong indication that he is reacting to the scene within the image is reminiscent of paintings by the American modernist, Edward Hopper. Hopper’s paintings, like the infamousNighthawks of 1942, were like stage sets awaiting a star actor. This protagonist, however, never arrives. Life just ticks on as normal in a mundane helpless World – anticipating everything, but failing to deliver on all counts.  For the absent human in Picken’s work, however, the situation appears even bleaker. The artist, given the despair and frustration conveyed in the construction of his paintings, might never get things back to the way he wishes them to be. Treehouse, and further powerful works by Picken, are, given their sheer obscurity, well worth seeing at the Old Ambulance Depot this week.
Solastalgia is on show at The Old Ambulance Depot, 77 Brunswick Street, Edinburgh, until the 28th of October. For more details follow this link.
Powered by